Protein A/G Magnetic Beads are intended for research only, and should not be used in any clinical or in vitro procedures for diagnostic purposes. 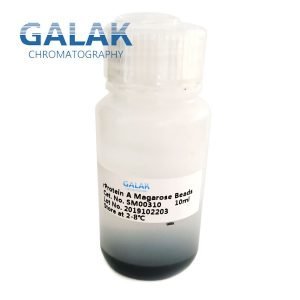 Protein A Agarose Beads transfer rProtein A high-density directional packets to the surface of superparamagnetic microspheres. The product has a higher antibody binding capacity and a lower non-specific Protein adsorption rate. Under more homogeneous elution conditions, antibodies with purity greater than 90% can be separated from serum samples. Protein A is a cell wall protein isolated from Staphylococcus aureus that binds mammalian IgG primarily through Fc fragments, but not to dog lgG and not to human lgM, lgD, and IgA. Protein A and protein G have different binding abilities to immunoglobulin from different sources and subclasses. Natural Protein A has five IgG-binding regions and some regions with unknown functions, while recombinant Protein A contains only five lgG binding regions without binding sites to albumin and cell surface, reducing non-specific adsorption.

rProtein A magnetic bead is a micron magnetic microsphere with a large specific surface area, which can greatly shorten the time required for antibody adsorption. The product performance is shown in table 1. This product is suitable for antibody purification in plasma, ascites, tissue culture supernatant, and other samples, as well as antibody fixation and other related studies. Users can select the category of magnetic beads according to the species source and subtype of the target antibody. The compatibility of Protein A, Protein G, and Protein A /G with different antibodies is shown in the attached table.

Binding Ability of Protein A, Protein G, and Protein A/G 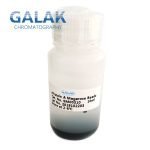 Need help with easier liquid chromatography solutions? We are experts!